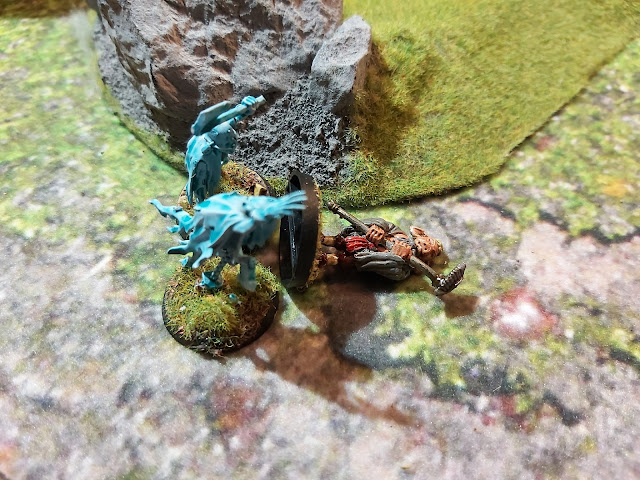 Reinforced after their last mission, the Pact decided to resume their search for Malicus Crane. This time, the Pact were supported by 4 D10 and 4 D8 Hirelings. Having experienced failure before doing a search, a different approach was required. Turn 1 The initial plan was to get the fastest movers (Gandwarf and Legolan) to the furthest corners as quickly as possible, and then complete the required searching. However, both experienced failed rolls and could only move 21".  Elsewhere, Gimme and Freddo would move as fast as they could to the nearest corners. This time, the Hirelings were positioned to protect the primary Pact members from the spawning points. This strategy worked as two Wraiths (D10) moved to intercept one of our D8 Hirelings. Despite putting up a good fight, the Hireling was defeated by the Wraiths.   Turn 2 Gimme and Freddo managed to scout their respective corners and shifted their attention to helping the other members of the Pact. Our D10 and D8 Rang
Post a Comment
Read more

Lost Construct AKA Find the Golem 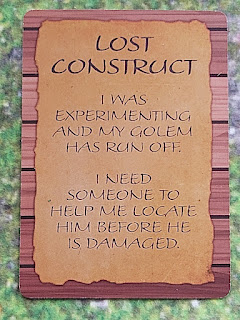 Having suffered defeat in their last adventure, the Pact took the chance to rest and recover. However, the Pact were short on Hirelings and Silver. Before they could continue with their campaign, they needed to make some money fast. Freddo headed to the Mercado to look for any jobs going. Fortunately, he saw a parchment nailed to a board. Ripping the parchment off the board, Freddo ran back to the rest of the Pact. The Mission Parchment Another wizard had created an Iron Golem. Unfortunately for him, his golem had run off and subsequently gone missing. As a result, the Wizard was offering a reward for its safe return. The missing Iron Golem Turn 1 Spending the last of their Silver on two D6 Hirelings, the Pact set off to look for the errant golem. Arriving in the area where the golem had been seen, the pact split up to search for it. Unfortunately, this area was known to be patrolled by Orcs (D10), Goblins (D8) and Giant Ants (D6). Sure enough, Giant Ants and Go
Post a Comment
Read more 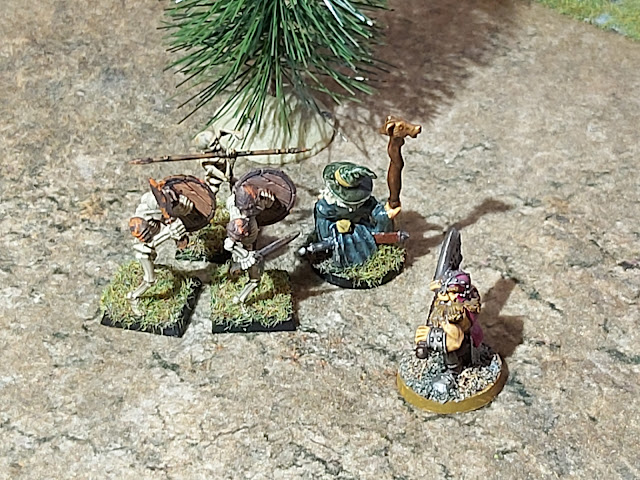 Fresh from their success in the previous mission, the pact moved on with the next part of their quest. For this mission, our hunters have been promoted to the next level - Journeymen. This meant the enemies would be harder to fight. This time, the pact would be facing skeleton warriors (d8) and wraiths (d10). For this adventure, our pact were joined by the following 4 d10 Ranged Fighters, 2 d8 Melee Fighters, 1 d6 Melee Fighter. The aim of this mission was to scout the four corners of the playing area. Turn 1 This turn was spent maximizing movement to get across the table as quickly as possible to scout the four corners. Gandwarf the Wizard led the way, only to draw the attention of some recently arrived skeleton warriors.   Turn 2 Freddo the Halfling achieved the first success for the pact by successfully searching a corner. Legolan and Gandwarf headed the furthest corners. Both were flanked by Gimme the Dwarf and the melee fighters. The Ranged Fighters took up position on
Post a Comment
Location: Southampton, UK
Read more 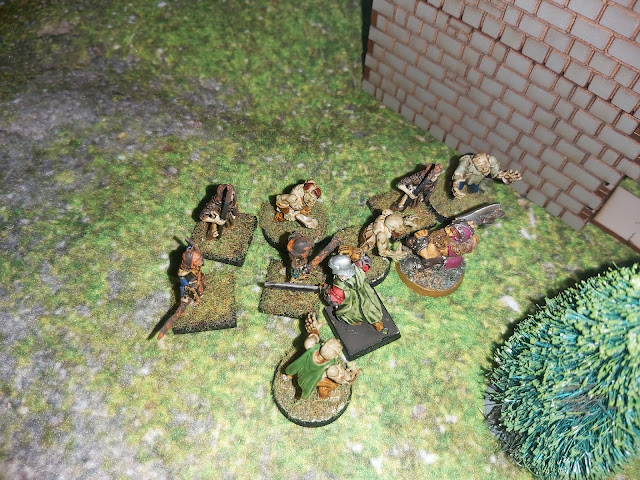 After an 8-month hiatus, a welcome return to Nightwatch. This time out, our pact has been tasked with retrieving a tome, that would reveal the location of a missing artefact. Our four pact members were joined by the following: 4 D10 Ranged Fighters, 1 D10 Melee Fighter. Turn 1 Gandwarf and Freddo headed towards to the furthest part of the ruins to search for the errant tome. Gimme and the D10 melee fighter advanced to the centre of the ruins. From here they hoped to defend against any enemies spawning in the ruins. Elsewhere, Legolan and the ranged fighters took up positions to defend the flanks from any spawning enemies. Turn 2 Wanting to give everyone time to search, Gimme and melee fighter waded into close combat with a group of zombies and skeleton warriors.   With the enemy distracted, Freddo and Gandwalf started to search the upper levels of the ruins.   At the end of the turn, more zombies spawned and headed to the nearest objective to defend it.
Post a Comment
Read more

A foray into Stargrave - Part 2 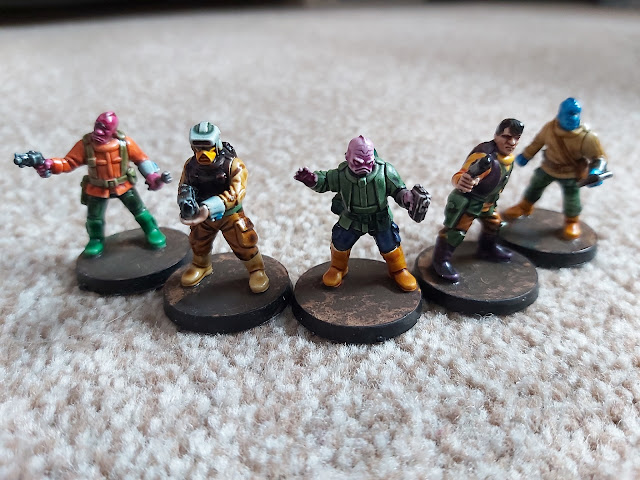 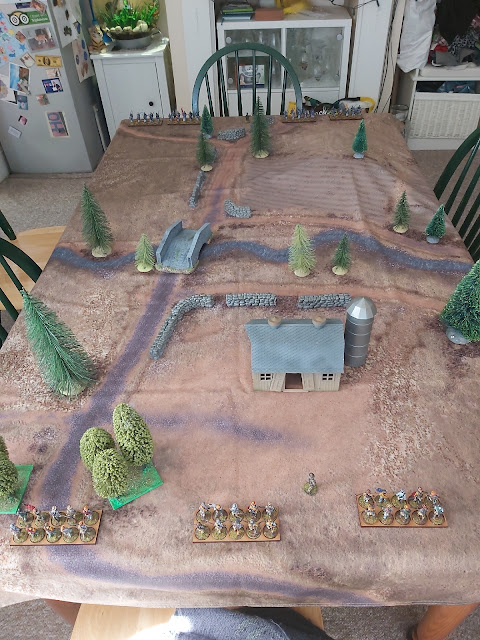 Had a chance to use the dining room table for a game this week. It was quite nice going from our usual 3 x 3 table to a 5 x 3 table. This afforded the chance to use the American Civil War (ACW) figures that I had painted up during lockdown and to have a go at using the Big Battles rule set. Each side had four units and a commander, and we played Scenario 1 in the book. Scenario objectives were to capture and maintain control of the following: The Barn The Bridge The Hill One point would be awarded for maintaining control of an objective at the end of the turn. The scenario would last at least 8 turns, before we rolled for night fall. The Battlefield. The Union Army advances. Confederates defend the barn and advance on the bridge. The Union Centre takes casualties, but forces the Confederates off the bridge. The Union storms the bridge! The last Confederate unit tries to defend the barn. In the end, a decisive victo
Post a Comment
Location: Southampton, UK
Read more

Getting into Napoleonic Skirmish wargaming 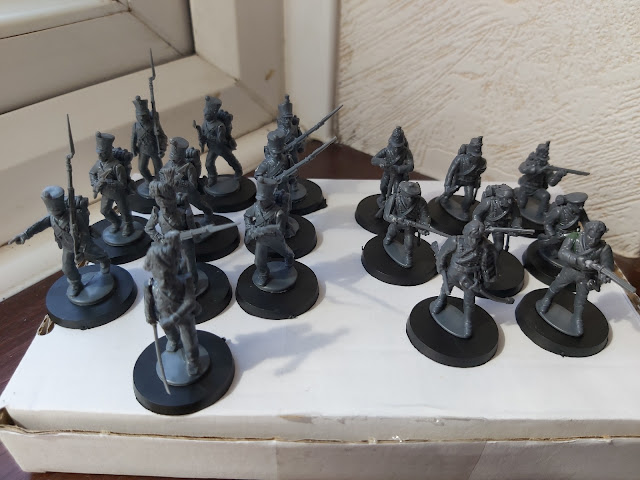 I have always been a fan of the Sharpe TV series starring Sean Bean. When I heard that one of my favourite wargames rule sets was releasing a themed set of rules for the musket era, I decided to buy enough figures to enable a skirmish game. First up was some Wargames Atlantic British Rifles. These are multipart figures that can be constructed to look like the characters from Sharpe, and you get 8 figures on a sprue. Next up was some Perry Miniatures French Napoleonic Infantry. With these, you get 10 multipart figures on a sprue. So, a total of 18 figures for a skirmish game. The completed figures I started with the British Rifles first. Putting together figures to represent Sharpe, Harper, Hagman, Harris and Cooper. Started painting Harper, Sharpe & a Rifleman The famous five (l to r) Harris, Cooper, Sharpe, Harper and Hagman British Rifles   Having completed the British forces, it was time to make a start on t
Post a Comment
Location: Southampton, UK
Read more
More posts

Interesting blogs to look at